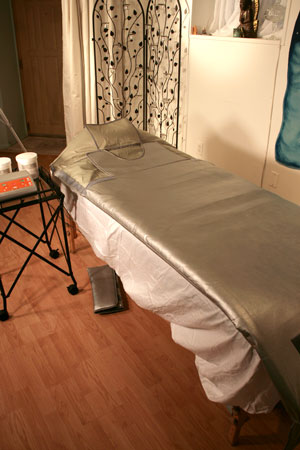 The Sudatonic Slimming System does not make fat “leave” the body. Instead, stored fat is converted into fatty acids and used by muscles for energy. The heating of the body and need to cool down through perspiration must be fueled by energy, this fuel comes from the converted fatty acids (now energy) that was released by the fat cells.

Click on the links below to learn more about how the Sudatonic™ Slimming System works.

Fat In Your Body 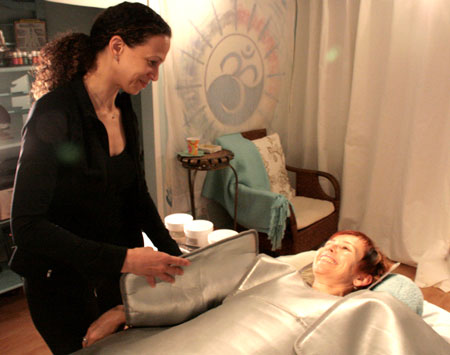 Heating and Cooling the Inner Body
Marvelous things happen beneath the skin in the heat of the sweat bath. The capillaries dilate permitting increased flow of blood to the skin in an attempt to draw heat from the surface and disperse it inside the body. The bather's skin becomes cherry red. The heart is pressed into a faster pace to keep up with the additional demands for blood. Impurities in the liver, kidneys, stomach, muscles, brain, and most other organs are flushed out by the faster flow of juices. The skin and kidneys filter the wastes, excreting them in sweat and urine. 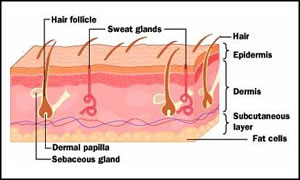 Some researchers claim that the rapid flexing of the heart and blood vessels in the heat of the sweat bath is a healthy exercise that puts little more strain on the heart than strolling on level ground. The increased capillary volume, they say, keeps blood pressure normal. Other medical people, however, qualify their commendations. One Finnish study observed that whereas blood pressure of healthy persons remains approximately normal in a sweat bath, there occurs a marked reduction of pressure in persons suffering from high blood pressure. However, this effect is only transient, and the original condition returns soon after the sweat bath.

American doctors commonly recommend that elderly people and persons with heart problems should avoid sweat bathing. Finnish and German doctors feel otherwise. Perhaps this difference of opinion arises from the fact that the Germans and especially the Finns are more familiar with sweat bathing.

While the surface temperature of the skin may rise as much as 10 degrees C, inner temperatures increases up to 3 degrees C. This is the "fever" that Hippocrates and generations of medical people after him sought, and is created as one reclines in a sweat bath! Of course, it is unlikely that "every disease" can be cured by fever, but it is common knowledge that many bacterial and viral agents do not survive well at temperatures higher than normal body temperatures. It is also possible that damaged cells repair themselves quicker in fever conditions due to the increased metabolic rate. Recovery from illness then comes easier and quicker.

The oxygen needs of the body increase by about 20%; so the lungs, another important eliminator of body wastes, join in the body's quickened pace. (The lungs' rapid exchange of carbon dioxide for oxygen is hindered in some sweat baths. In high humidity, water condenses on the tiny alveoli where this exchange takes place and breathing may be slightly more difficult. On the other hand, if the air is too dry, as occurs in many American saunas, mucous membranes my become dry and damaged.) Clogged respiratory passages are opened by heat, giving relief from colds and other minor respiratory problems. Sweat bathing is not recommended for those suffering from pneumonia or other acute respiratory diseases.

When the body is slowly cooled, the effects of heat are reversed - the heart calms, sweat pores close, dilated blood vessels contract and body temperature returns to normal. (The German Sauna Society recommends a warm foot bath to re-open closed blood vessels.) On the other hand, abrupt cooling brought on by a plunge into snow or icy water creates a more dramatic effect. For this reason, people with weak constitutions should avoid rapid cooling. Vessels near the skin's surface contract, but since the skin's metabolism returns to normal slower than the circulatory system, wastes accumulate that are normally washed out by the blood. Local vasodilators are then stimulated and blood rushes back to the skin's surface. The heart continues to beat vigorously and you may experience psychedelic flashes bouncing across your retina from the increased adrenal activity - an unforgettable experience! The swift transition from hot to cold stimulates the kidneys and usually creates the desire to urinate.

The body is 60% water by weight and any pounds lost at this point will be promptly regained. (However, sweat baths have an indirect effect on weight loss.) As you can imagine, the combination of sweat bathing and cooling conditions the body, and a well-tuned body is more resistant to colds, disease and infection. In cold weather, the warm glowing feeling lingers for hours, while in hot climates, the body seems cooler than before the sweat bath.
Excerpts from the book, Sweat, by Mikkel Aaland

Why would you want to sweat so much, and what's the big deal? 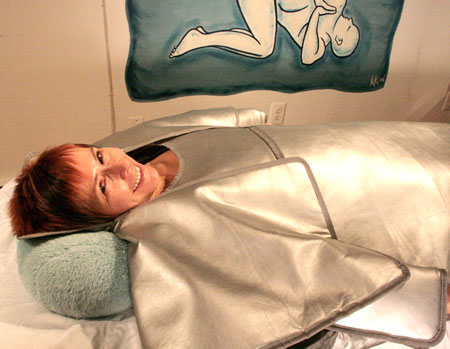 Sitting in a sweat bath could be the most vigorous activity you've had all day. The heat produces an artificial "fever" and urges every organ of the body into action. While outwardly relaxed, your inner organs are as active as though you were jogging or mowing the lawn. At the same time, you are being cleansed from inside out by the skin, your body's largest organ and it's excretion, sweat.

The oldest known medical document, the Ayurveda, appeared in Sanskrit in 568 BC, and considered sweating so important to health that it prescribed the sweat bath and thirteen other methods of inducing sweating. Throughout history, physicians have extolled the medicinal value of the sweat baths. Today, enthusiasts claim that beyond being relaxed, the sauna gives relief from the common cold, arthritis, headaches and hangovers. Medicinal evidence shows that bathing in temperatures of 90 degrees C (192 degrees F) has a profoundly beneficial effect on a healthy body.
Sweating is as essential to our health as eating and breathing. It accomplishes three important things: rids the body of wastes, regulates the critical temperature of the body at 37 degrees C (98.6 degrees F), and helps keep the skin clean and pliant.

Many people, simply don't sweat enough...
making sweat bathing particularly desirable during these times. Antiperspirants, artificial environments, smog, synthetic clothing, and a physically idle lifestyle all conspire to clog skin pores and inhibit the health flow of sweat. These detrimental effects can be reversed in a sweat bath.

The physiological effects of different sweat baths are not the same, due to variations in heat and humidity. The length of time spent in the sauna differs from time spent in other sweat baths. When you lounge in a sweat bath, heat sensitive nerve endings produce acetylcholine, a chemical which alerts the 2.3 million sweat glands embedded in the skin. But not all of them respond. The aprocine sweat glands, located in the pubic and arm pit areas, are activated only by emotional stimuli. The eccrine sweat glands, by far the most abundant, respond to heat.

During a 15 minute sauna, about 1 liter of sweat is excreted, depending on the individual. (Normal daily rate ranges from .5 to 1.5 liters.) Eccrine sweat is clear and odorless; any odor is only created by the presence of bacteria. One of its chief functions is to cool the body by evaporation, although there are also eccrine glands on the palms of your hands and soles of your feet which react to emotional stimuli.

Like the baseball batter who wets his hands for a better grip it is believed these sweat glands were intended to provide us with a good grip on clubs, rocks, or vines when our survival often depended upon them.

A third kind of sweat, called insensible perspiration, originates inside and works its way though blood and other cells to the surface of the skin. Even without a sweat bath, approximately a liter of insensible perspiration evaporates each day. Sweat also has the function of being a judicious garbage collector. During a 15 minute sauna, sweating can perform the heavy metal excretion that would take the kidneys 24 working hours. Ninety-nine percent (99%) of what sweat brings to the surface of the skin is water, but the remaining one percent (1%) is mostly undesirable wastes. Excessive salt carried by sweat is generally believed to be beneficial for cases of mild hypertension. Some mental hospitals use saunas in their rehabilitation programs to pacify patients. A metabolic by-product, urea, if not disposed of regularly, can cause headaches, nausea and in extreme cases, vomiting, coma and even death. Sweating is such an effective de-toxifier that that it draws out lactic acid which causes stiff muscles and contributes to general fatigue. Sweat flushes out toxic metals such as copper, lead, zinc, and mercury, which the body absorbs in polluted environments.
Excerpts from the book, Sweat, by Mikkel Aaland 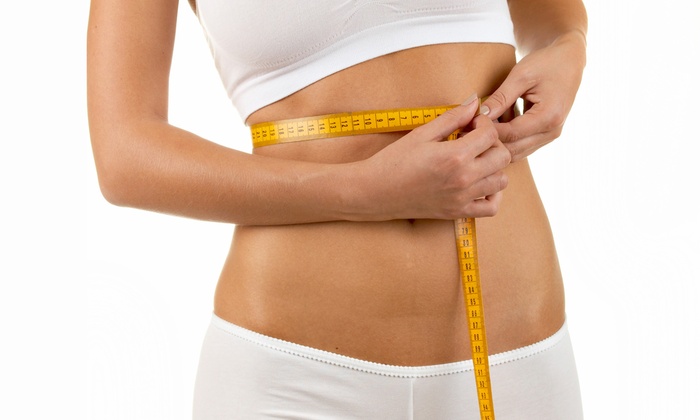 What The Researchers Say About FIR

Introducing the NEWLY DESIGNED 4-zone FAR Infrared Body Shaping System. This system is exclusively made for the Sudatonic treatments, having American clients in mind. We asked our current Sudatonic systems owners what changes they would like to see in the new system and based on their responses and wishes we created the new design.